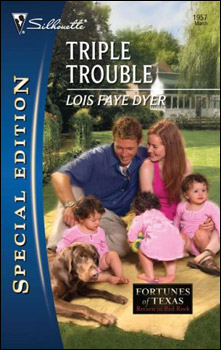 And Father Makes Four
As financial analyst for the Fortune foundation, Nicholas Fortune was used to crunching numbers—not changing diapers. But when he learns he’s just become temporary guardian to triplets, the overwhelmed new father needs to find a nanny, pronto.

Is Five in the Cards?
Charlene London is the answer to the Texas bachelor’s prayers, even if she can’t see it. And though it takes no time for the three baby girls to steal Charlene’s heart, their substitute dad is another story. Her sexy boss is strictly off-limits, even if her job was just temporary. Unless he makes her another offer—one she can’t refuse.

Nicholas Fortune closed the financial data file on his computer and stretched. Yawning, he pushed his chair away from his desk and stood. His office was on the top floor of the building housing the Fortune Foundation, and outside the big corner windows, the Texas night was moonless, the sky a black dome spangled with the faint glitter of stars.

“Hell of a lot different from L.A.,” he mused aloud, his gaze tracing the moving lights of an airplane far above. The view from the window in his last office in a downtown Los Angeles high rise too often had been blurred with smog that usually blotted out the stars. No, Red Rock, Texas, was more than just a few thousand miles from California—it was a whole world away.

All in all, he thought as he gazed into the darkness, he was glad he’d moved here a month ago. He’d grown tired of his job as a financial analyst for the Kline Corporation in L.A. and needed new challenges—working for the family foundation allowed him time to contemplate his next career move. And a nice side benefit was that he got to spend more time with his brother, Darr.

With the exception of the hum of a janitor’s vacuum in the hallway outside, the building around him was as silent as the street below. Nicholas turned away from the window and returned to his desk to slide his laptop into its leather carrying case. He was just shrugging into his jacket when his cell phone rang.

He glanced at his watch. The fluorescent dials read eleven-fifteen. He didn’t recognize the number and ordinarily would have let the call go to voice mail, but for some reason he thumbed the On button. “Hello?”

“Ah, excellent.” Relief echoed in the man’s voice. “I’m sorry to call so late, but I’ve been trying to locate you for three days and my assistant just found this number. My name is Andrew Sanchez. I’m an attorney for the estate of Stan Kennedy.”

Nicholas froze, his fingers tightening on the slim black cell phone. “The estate of Stan Kennedy? Did something happen to Stan?”

“I’m sorry to be the bearer of unfortunate news.” The caller’s voice held regret. “Mr. Kennedy and his wife were killed in a car accident three days ago.”

“It’s my understanding you and Mr. Kennedy were quite close?”

“We were college roommates. I haven’t seen Stan in a year or so, but we keep in touch—kept in touch by phone and e-mail.” Like brothers, Nicholas thought. “We were close as brothers in college.”

“I see. Well, Mr. Fortune, that probably explains why he named you guardian of his children. The little girls are currently safe and in the care of a foster mother, but the caseworker is anxious to transfer custody to you. The sooner they’re in a stable environment the better.”

“Whoa, wait a minute.” Nicholas shook his head to clear it, convinced he hadn’t heard the attorney correctly. “Stan left me in charge of his kids?”

Nicholas tried to remember exactly what Stan had told him about his will. They’d both agreed to take care of business for the other if anything happened to them. He’d been Stan’s best man at his wedding to Amy and he definitely remembered Stan asking him to look after his bride should anything happen. Even though their conversation had taken place while emptying a magnum of champagne, Nicholas knew his word was important to Stan and he hadn’t given it lightly.

But babies? And not just one—three.

“The triplets weren’t born when we made a pact to look after each other’s estate, should anything ever happen,” he told the attorney. And neither of us thought he and Amy wouldn’t live to raise their daughters. “But I promised Stan I’d take care of his family if he couldn’t.”

“Excellent.” The attorney’s voice was full of relief. “Can I expect you at my office tomorrow, then?”

“I know it’s extremely short notice,” Sanchez said apologetically. “But as I said, the caseworker is very concerned that the babies be settled in a permanent situation as soon as possible.”

“Uh, yeah, I suppose that makes sense,” Nick said. He thrust his fingers through his hair and tried to focus on the calendar that lay open on his desktop. “I’ve got a meeting I can’t cancel in the morning, but I’ll catch the first flight out after lunch.” Nicholas jotted down the address in Amarillo and hung up. It was several moments before he realized he was sitting on the edge of his desk, staring at the silent phone, still open in his hand.

Grief washed over him, erasing the cold, numbing shock that had struck with the news. He couldn’t believe Stan and Amy were gone. The couple met life with a zest few of their friends could match. It was impossible to get his head around the fact that all their vibrant energy had been snuffed out.

He scrubbed his hand down his face and his fingers came away damp.

He sucked in a deep breath and stood. He didn’t have time to mourn Stan and Amy. Their deaths had left their three little girls vulnerable, without the protection of parents. Though how the hell Stan and Amy had ever decided he was the best choice to act as substitute dad for the triplets, Nicholas couldn’t begin to guess.

In all his thirty-seven years, he’d never spent any length of time around a baby. He had four brothers but no wife, no fiancée or sister, and his mom had died two years ago. The only permanent female in his immediate family was Barbara, the woman his brother Darr had fallen in love with a month earlier. Barbara was pregnant. Did that mean she knew about babies?

Nick hadn’t a clue. And for a guy who spent his life dealing with the predictability of numbers, in his career as a financial analyst, being clueless didn’t sit well.

But he had no choice.

Despite being totally unqualified for the job, he was flying to Amarillo tomorrow.

He didn’t know a damn thing about kids. Especially not little girls.

He was going to have to learn fast….

Charlene London walked quickly along the Red Rock Airport concourse, nearly running as she hurried to the gate. The flight to Amarillo was already boarding and only a few stragglers like herself waited to be checked through.

Fortunately, the uniformed airline attendant was efficient, and a moment later, Charlene joined the short queue of passengers waiting to board.

For the first time in the last hour, she drew a deep breath and relaxed. The last three weeks had been hectic and difficult. Breaking up with her fiancé after three years had been hard, but quitting her job, packing her apartment and putting everything in storage had been draining. She’d purposely pared her luggage down to a few bags, since she’d be living with her mother in a condo in Amarillo while she looked for a job and an apartment.

And a new life, she told herself. She was determined to put her failed relationship with Barry behind her and get on with her career.

She sipped her latte, mentally updating her résumé while the line moved slowly forward. They entered the plane and her eyes widened at the packed cabin and aisle, still thronged with passengers finding seats and stowing bags in the overhead compartments.

Thank goodness I used my frequent flyer miles to upgrade to first class. She glanced at her ticket and scanned the numbers above the seats, pausing as she found hers.

The man rose and stepped into the aisle to let her move past him to reach the window seat.

He smelled wonderful. Charlene didn’t recognize the scent, but it was subtle and clean. Probably incredibly expensive. And thank goodness he isn’t wearing the same cologne as Barry, she thought with a rush of relief.

She was trying to get away from Barry—and didn’t need or want any reminder of her ex-boyfriend. Or fiancé. Or whatever the appropriate term was for the man you’d dated for three whole years, thinking he was the man you’d marry, until you’d discovered that he was… not the man you’d thought he was at all.

The deep male voice rumbled, yanking Charlene from her reverie.

“What?” She realized he was holding out his hand, the expression on his very handsome face expectant. He lifted a brow, glanced significantly at her carry-on, then at her. “Oh, yes. Thank you.”

He swung the bag up with ease while she slipped into the window seat. She focused on latching her seat belt, stowing her purse under the seat and settling in. It wasn’t until the plane backed away from the gate to taxi toward the runaway that she really looked at the man beside her.
He was staring at the inflight magazine but Charlene had the distinct impression he wasn’t reading. In profile, his face was all angles with high cheekbones, chiseled lips and a strong jawline. His dark brown hair was short, just shy of a buzz cut, and from her side view, his eyelashes were amazingly long and thick. She wondered idly what color his eyes were.

She didn’t wonder long. He glanced up, his gaze meeting hers.

Brown. His eyes were brown. The kind of eyes a woman could lose herself in, she thought hazily.

His eyes darkened, lashes half lowering as he studied her.

Charlene’s breath caught at the male interest he didn’t bother to hide. Her skin heated, her nipples peaking beneath the soft lace of her bra.

Stunned at the depth of her reaction, she couldn’t pull her gaze from his.

Despite his preoccupation with what lay ahead of him in Amarillo, Nicholas couldn’t ignore the quick surge of interest when he looked up and saw the woman standing in the aisle.