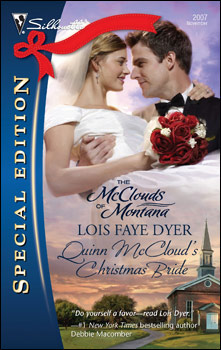 A Woman Who Can’t Go

Born and raised in Wolf Creek, Montana, librarian Abigail Foster loves the quiet of her life there. When ex-military agent Quinn McCloud is hired to temporarily fill the vacant Sheriff’s position, Abigail quickly realizes he’s the one man who could steal her heart and destroy her hard-won peace of mind.

And a Man Who Won’t Stay

One look at Abigail and Quinn realizes he’s met his match. But he’s a man who’s never put down roots, while Abigail is a woman with no desire to leave her small town. Though both recognize the impossibility of a future together, neither can walk away from the powerful attraction that binds them. When a child is left on Abigail’s doorstep, Quinn must employ all his expertise to keep Abigail and the little girl safe from the danger that threatens to destroy everything he holds dear.

Abigail Foster donned a light sweater and stepped out onto the wide porch, letting the screen door slap shut behind her. Two wicker chairs were pushed back from the white table in the far corner of the porch. An enameled tray and a plate with several sugar cookies sat next to a Wedgewood teapot atop the blue cloth. Lemon slices floated on the surface of amber-colored tea in delicate blue and white cups. Her aunts had obviously been interrupted during their afternoon Earl Grey-break and had left the comfortable corner, sheltered by the potato vine that climbed up the trellis.

But where had they gone? Abigail looked up and down the wide street. Down the block, two neighborhood eight-year-olds rode bicycles, weaving in and out of the autumn leaves collecting in red and gold drifts in the gutters. Two joggers, accompanied by a cocker spaniel tugging on his leash, circled around the boys and kept on going. The rhythm of the neighborhood surrounding the immaculate Victorian home and porch where Abigail stood ticked on as usual. But Abigail didn’t see her great-aunts.

She crossed the porch and descended the broad, white-painted steps, following the brick walkway around the house to the sideyard. She heard the murmur of voices, growing louder as she neared the back of the house. The rumble of a deeper, male voice mingling with her aunt’s lighter tones had her quickening her steps.

Red and gold maple leaves crunched under her rubber yard boots as she rounded the corner of the house. She made a mental note to clear the fallen leaves from the bed of chrysanthemums and dahlias edging the white clapboard siding over the next day or two. She knew from experience that the lovely, Indian summer days would quickly turn to chillier October weeks, followed by snowy November.

The sound of voices grew louder as she reached the backyard. A silver-grey pickup truck was parked on the gravel drive off the alleyway, just next to the stairs that climbed up the outside wall of the garage to the second-floor apartment above.

A tall man, dressed in faded jeans and boots with a blue flannel shirt stretched across broad shoulders, stood with his back to her, talking to her aunts. A big yellow dog nosed the leaves at their feet.

She didn’t recognize either the truck nor the stranger, but nevertheless, there was something familiar about the set of his shoulders and his powerful body. Perhaps it was the way he stood, hands on hips, his head bent toward the much smaller figure of Natasha, who waved her hands in dramatic emphasis as she spoke to him. Abigail frowned, trying to place the man, but failed.

The dog raised his head, saw her, barked, and charged.

Startled, Abigail froze, her eyes widening. The dog was huge and the closer he drew, the bigger and scarier he seemed.

“Buddy. Down.” The deep male voice was sharp, the command undeniable.

The dog halted in mid-charge and dropped to the ground.

Abigail stared at him. As her racing heartbeat slowed to something approaching normal, she realized that what she’d thought was a fierce predator was actually a blond Labrador Retriever. He panted, his pink tongue lolling while his big brown eyes fixed on her with eager friendliness. His ears lifted with endearing interest as he eyed her.

Abigail looked up. The man walked toward the dog, pausing when he reached him. He limped slightly, she noted, but somehow, it didn’t dilute the sheer power he projected. His coal black hair was cut short. Equally dark eyebrows arched above grey eyes, startlingly pale in his suntanned face. Abigail caught her breath. The dog may not be dangerous but the man certainly was – a lethal energy radiated from him. Behind half-lowered black lashes, those grey eyes were intent, assessing, as his gaze met hers.

“Buddy’s friendly – he wouldn’t hurt you.” He grinned, the twinkle in his eye disarming, the flash of white teeth and easy quirk of his lips told her this was a man accustomed to charming women.

The switch from dangerous to easy friendliness set off alarm bells for Abigail. The last time a man had smiled at her with that level of male interest and charm was during her junior year at college and things hadn’t ended well. Thq5 whirlwind relationship had taught her a lesson about charming men she’d never forgotten. So she was immediately suspicious of the dog owner’s motives.

“Really?” She said coolly, lifting an eyebrow in disbelief. “He has an impressive set of teeth. He’s never bitten anyone?”

“No, ma’am,” he responded solemnly, although his eyes reflected amusement. “Not unless I told him to.”

Despite herself, Abigail gaped. “You tell him to bite people?”

“Only criminals – and only in the line of duty,” he amended.

“This is Quinn McCloud, Abigail,” Natasha said as she and her sister, Elizabeth, joined them.

“He’s filling the sheriff’s slot until the town can hire someone permanent.”

Quinn reached his truck and looked over his shoulder just in time to see Abigail march up the back steps. Her brown hair was pulled up in a ponytail that swung smartly from side to side with each step she took. Faded jeans fit snugly over the lush curve of her bottom and down her long legs. She wore black rubber barn boots on her feet and the bright red sweater covered a plain white tee-shirt. She pulled open the screen door and disappeared inside, the door slapping shut with a definite smack of finality.

The two older ladies followed her more slowly, heads together as they whispered.

He grinned and shook his head. The great-aunts seemed glad to have him living over their garage but for some reason, Miss Abigail had disliked him on sight.

Which sure as hell wasn’t how he felt about her, he thought. There wasn’t anything overtly sexual about Abigail Foster but for some reason, she turned him on. He could swear she wasn’t wearing a lick of makeup; her face looked freshscrubbed, her lips naturally pink. She had a small straight nose above a lush mouth with a plump lower lip and deep blue eyes edged with thick dark lashes below equally etched eyebrows. Her skin was fair, with a dusting of tiny freckles over the arch of her cheekbones. And her chin had a distinctly stubborn set, especially when she looked at him and her eyes narrowed with suspicion.

He walked around the pickup, untying knots as he went to loosen the nylon rope holding the tarp in place.

What was it Ren’s report had said about the Fosters? He thought for a moment as he yanked the rope free and tossed the tarp back.

Oh, yeah. She’s a librarian. And one of her aunts – great-aunts, he corrected himself, was the town librarian before Abigail took over.

Quinn grabbed his duffel bag and a larger bag of dry dog food.

“Come on, Buddy,” he called. The dog immediately left his inspection of the base of a nearby oak tree and followed him up the stairs to the landing, bounding inside when Quinn unlocked and shoved open the door.

Just as he stepped over the threshold, a breeze carried the faint sound of feminine voices from the front of the house.

He grinned. Acting as temporary Sheriff for Wolf Creek might not offer the excitement of his last case for Seattle’s Colter Investigations but after meeting Abigail and her aunts, life suddenly looked much more interesting.