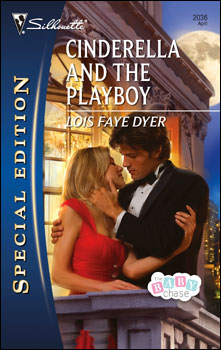 When a gorgeous doctor invites diner waitress Jenny Labeaux to a fancy ball, she expects one magical evening of feeling like Cinderella. And as the clock strikes twelve, Jenny is still in Chance Demetrios’s strong arms. Until she realizes that the scandal-plagued playboy is everything her young daughter doesn’t need in a daddy—and leaves him in her dreams. The hardworking single mother touched a part of Chance he hadn’t known existed. For the first time, the wealthy bachelor is thinking about wedding bells! But proving his love to Jennifer—and his overbearing, wealthy family—will take more than a glass slipper. It’ll take everything Chance is.

Jennifer Labeaux noted her friend’s mischievous grin before she glanced over her shoulder. As usual, her heartbeat sped up at sight of the tall, darkhaired male striding toward her section of the Coach House Diner.

Dr. Chance Demetrios was easily six feet four inches tall and built like a linebacker. He wore his black hair a shade long and his eyes were a deep chocolate brown – eyes that twinkled, charmed and seduced Jennifer with each conversation they shared.

No doubt about it – Chance was too sexy, too rich, and too high-octane for a waitress whose most sophisticated night-out was visiting her neighborhood ice cream shop with her five-year-old daughter.

She watched him slide into his usual booth, third from the back, with a window view of the Cambridge, Massachusetts street outside. He always sat in her section. Jennifer was torn between being flattered and wishing he wouldn’t single her out. Not that she disliked him – to the contrary. He made her yearn for things she knew she couldn’t have and she was far too attracted to him for her own good.

Over the last six months, she’d seen Chance nearly every morning. There was no mistaking the male interest in his eyes but his persistent friendliness and good-natured acceptance of her refusals when he asked her out had slowly but surely eased, and then erased, her natural wariness. Overheard conversations between him and other customers only increased his appeal. He appeared to be genuinely interested in the lives of the Diner regulars.

Even if dating were possible in her life at the moment, she’d never date Dr. Demetrios, she thought with regret. Rumor had it that he loved women and went through girlfriends like a pms’ing woman went through chocolate bars. Despite being powerfully attracted to him, Jennifer knew he was out of her league. If she ever became involved with a man again, he wouldn’t be someone with a stable of women.

She tucked a menu under her arm, picked up a glass of ice water and a fresh pot of coffee and walked to the booth.

“Good morning, Dr. Demetrios,” she said with a bright smile. “What can I get you this morning?”

The way his deep voice seemed to linger over her name always sent shivers up her spine and made heat curl through her midsection.

Determined to ignore her rebellious body’s reaction, Jennifer kept her gaze on the thick coffee mug as she poured. She steeled herself, setting down the pot and taking out her pad and pen. Despite preparing herself, however, meeting his gaze was a jolt. His dark eyes were warm, appreciative, and filled with male interest.

And then he smiled. Jennifer had to fight to keep from melting into a pool of overheated hormones. She nearly groaned aloud.

“The usual?” Thank goodness her voice didn’t reflect her inner turmoil, she thought with relief and not a little suprise.

“Yeah, please,” he said, his smile wry. “And maybe you can just hook up an IV with black coffee.”

“Late night?” she asked with sympathy. Her gaze moved over his face, noting the lines of weariness she’d been too preoccupied to note earlier. His dark eyes were heavy-lidded and his jaw shadowed with beard stubble. He looked as if he’d either just rolled out of bed or hadn’t gone to bed at all last night. “Did you work all night?”

“You work too hard,” she said.

“All part of being a doctor.” He smiled at her. “I knew the job had lousy hours when I signed on.”

She lifted an eyebrow at his reasoning. “Maybe so, but if you don’t sleep, how are you going to function?”

He glanced at the Rolex on his wrist. “Maybe I’ll catch an hour or two nap on my office sofa before my first appointment.”

“Good plan.” Jennifer heard the cook call her name and realized she’d been chatting too long. “I have to go. I’ll tell the other waitresses you need your coffee topped up often this morning.”

Jennifer was tempted to return his smile but instead, forced herself to nod pleasantly and turn away.

Through half-lowered lashes, Chance sipped the hot black coffee and watched her walk away. He suspected the employees and regulars in the diner weren’t fooled but he couldn’t summon up the energy to care if they knew he loved looking at her. She wore the same uniform as the rest of the waitresses – black slacks and white shirt under a black vest. But the clothes took on a different vibe on Jennifer. Her long legs, lush curves, and graceful carriage reminded Chance of a Las Vegas showgirl every time he saw her. The Diner’s owner might think the uniform made his waitresses blend together, but Jennifer stood out like a long-stemmed rose in a bouquet of daisies.

He’d been asking her out for months now and each time, she smiled and politely refused. Six months earlier, he would have shrugged and moved on to the next beautiful woman. But for some reason that he couldn’t begin to understand, he’d lost the urge to pursue other women since meeting Jennifer.

He couldn’t accept that she wouldn’t go out with him. He knew damn well she was attracted to him. Despite her never-wavering cool yet friendly reserve, he felt the strong tug of sexual chemistry between them every time he saw her. He’d dated a lot of women over the years. He knew he hadn’t misread the faint flush of color over the high arch of her cheekbones when they talked, nor the way she shielded her gaze with lowered lashes when he teased her.

No, Jennifer was definitely interested. He flirted, she’d smiled. But she refused to go out with him. He’d asked her at least a dozen times, probably more. And she’d politely refused each time, always saying she didn’t date customers.

From the snippets of conversation he’d overheard from the other waitresses, Chance didn’t think she dated anyone at all.

Which only made him more intrigued and more determined to break down her defenses and spend time with her, away from the Diner.

He rolled his shoulders to relieve the ache of muscles too long without rest and stretched his long legs out beneath the table. The red, vinyl-covered bench seat was comfortably padded and like everything else in the Coach House Diner, reflected the 1950’s theme. The effect was cheerful and welcoming. Chance had felt at home here from the first moment he’d stepped over the threshold six months earlier. Since the diner was only a short walk from the medical facility where he worked, it had quickly become his favorite place to have coffee, breakfast, lunch or grab a quick dinner if he’d worked late.

He glanced around the room, nodding at Fred, an elderly gentleman seated on a stool and eating his breakfast at the end of the long counter. Fred was a retired railroad engineer and despite his advanced age of ninety-five, still woke early. Chance had spent more than one morning, drinking coffee next to Fred on one of the round seats at the counter between five a.m. and six.

He took another long drink of caffeine-loaded coffee and rubbed his eyes. It had been one hell of a week. After long hours of hard, frustrating work, he and his research partner, best friend Ted Bonner, had finally disproved allegations that their research was questionable.

In the midst of proving the funding was legally and morally ethical, Chance had also watched as Ted fell in love and became engaged over the last several months. Chance would never admit it aloud, but observing his best friend’s happiness with his fiancee had raised questions for Chance about his own lifestyle. Did he want to meet a woman who could make him want to settle down? Could he be monogamous?

Given his history with women, Chance doubted it. He loved women – their smiles, their silky hair and skin, the way their eyes lit with pleasure when they made love.

No, he couldn’t imagine ever settling down with one woman.

Which made him wonder why he hadn’t dated anyone over the last six months.

Unconsciously, his gaze sought out Jennifer, locating her at the other end of the room. Her laughter pealed musically as she took an order from two women in business suits.

He muffled a groan and swigged down coffee. He knew damn well Jennifer was the reason he hadn’t dated anyone in months. For some strange reason, he just wasn’t interested in other women since he’d met her.

Or maybe I’m just too busy with work, he thought, unwilling to accept that the beautiful blond was the sole reason his love life was nonexistent.

Midweek, he’d spent two long nights in the operating room. His volunteer work at a free clinic in a Boston low-income neighborhood often expanded to include surgery during emergency situations. This week, those emergencies seemed to roll in almost on each other’s heels.

I’m too damn tired, he told himself. That’s why I’m being introspective. A solid eight hours of sleep and life will look normal again.

He frowned at his empty coffee mug. He hated examining his feelings and no matter how he sliced it, he couldn’t deny that he’d been spending too much time lately considering his life. And for a man who was rarely alone, he could swear he sometimes felt lonely.

Chance looked up. The red-haired waitress he often noticed talking with Jennifer, stood next to his booth.

She quickly filled his mug and left, letting Chance return to his brooding.

He’d had plenty of affairs, but none of his relationships with women could qualify as meaningful.

And that’s the way I like it, he thought. So why am I wondering if there ought to have been more?

He dragged his hand over his face and rubbed his eyes.