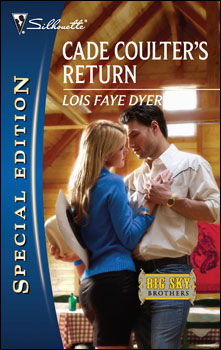 When he left Montana thirteen years ago, Cade Coulter swore he’d never return. But Joseph Coulter’s first-born couldn’t turn his back on the ailing family ranch. Or the woman who’d been given a home at the Triple C.

With his irresistible blend of danger and potent masculinity, Cade was the quintessential cowboy. But Mariah Jones believed that beneath the loner’s gruff facade was a man who secretly longed to reconnect with his family. Why else would he have come back to Indian Springs? She’d made a promise to Cade’s father–one she intended to keep. And now she was in danger of losing her own heart to the sexy, guarded rancher…

Mariah Jones shoved open the barn door and braced herself for the frigid bite of a March Montana day. The wind swept down from the buttes, carrying the chilly scent of snow, and she tucked her chin deeper into the shelter of her coat collar. Despite the pale sunshine and the protection of her fleece-lined coat, gloves and wool hat, she couldn’t escape the sting of cold.

She walked to the corral and upended a bucket of oats into the metal feeder just inside the pole fence. A longlegged sorrel quarterhorse left the shelter of the cattle shed across the pen and ambled toward her.

“Hey, Sarge,” Mariah crooned. The big gelding eyed her, his liquid brown eyes inquisitive, and she tugged off one glove to stroke her bare palm over his soft muzzle. He nickered, pushing against her hand and snorting softly before he lowered his head to the pile of grain.

Mariah rubbed Sarge’s neck beneath the rough tangle of his dark mane, drawing comfort from the gelding’s easy acceptance and the feel of his solid, warm body beneath her palm. She still had a long list of chores to finish before she could rest, but the familiar crunch of oats between the horse’s strong teeth and the inevitable signs of winter moving toward spring soothed the worry that nagged at her, stilling her for the moment. There was reassurance in the ordinary moments of ranch life— especially now, when the rhythm of life on the Triple C had changed irrevocably only a few months earlier.

She petted Sarge’s neck in absentminded movements, distracted as her gaze moved over the buildings that made up the Triple C headquarters. Across the wide gravel yard, the two-story structure of the main house was silent. There was no trail of smoke drifting skyward from the chimney, no movement behind the drawn curtains. The house looked shuttered and lifeless.

Grief caught her unaware, slicing into her heart with all the power of a razor-sharp knife. Her lips trembled and her vision blurred before she firmed her chin, willing the tears not to fall. Three months had passed since Joseph Coulter, owner of the Triple C, had died of lung cancer. They’d buried him in the small family plot in Indian Springs Cemetery, next to his wife and among the graves of generations of Coulters that had cared for the ranch before him.

“I miss him, Sarge,” she murmured, turning her face away from the deep porch, now so empty without Joseph’s gray-haired, lanky figure. The taciturn sixty-eight-year-old widower had become a father figure to Mariah and his passing had left a deep ache in her heart.

Everything seems quieter, she thought as her gaze slipped over the cluster of outbuildings, corrals and the big barn. She had the strange sense that the Coulter Cattle Company was holding its breath, marking time while waiting for the next generation of Coulter males to arrive and set it in motion once again.

The rumble of an engine broke the quiet. Mariah looked up just as a mud-spattered pickup rattled over the planks of the bridge across the creek. Moments later, the driver pulled up next to the corral and got out to join her at the fence.

Pete Smith shook his head, his weathered face doleful beneath the battered cowboy hat he wore. “Ned says the detective agency hasn’t found them yet.”

“Do they have any leads?”

Mariah nearly groaned aloud. Ned Anderson, the local attorney representing the Coulter estate, had been unable to locate the heirs. A month ago, he’d hired a Denver detective agency to take over the search but Joseph’s four sons were proving surprisingly difficult to find.

“I realize it’s been more than a dozen years since Joseph had any contact with them but still, how is it possible for four men to disappear so thoroughly?” she said, frustration coloring her tone.

“I don’t know, Mariah.” Pete lifted the worn hat and rubbed gnarled fingers over his close-cropped white hair. Worry furrowed his brow. “I heard gossip over the years that said them boys made a pact. The older ones waited until the youngest was done with high school and they all left the next day. They swore they’d never come back to the Triple C but nobody ever said where they went when they left.”

“I hope they’re found soon.” Mariah’s salary and tips as a waitress at the diner in Indian Springs barely covered food and necessities. The feed store was running a tab for hay and grain but she had no idea how long they would continue to do so. And after months of medical expenses, Joseph’s bank account had been nearly empty when he died.

“Me too, Mariah, me too.” Pete awkwardly patted her shoulder, then clapped his hat on his head and jerked a thumb at the truck. “I’ll carry the groceries in before I get back to work on the tractor.”

The wind picked up and Mariah shivered as the two carried bags to the bunkhouse kitchen. The Triple C had been a haven for all three of them—Pete, fellow ranch hand J.T. and herself—when they each had desperately needed shelter. They’d vowed to remain and care for it until Joseph’s sons returned to take over. She knew all of them privately hoped to stay on. But the ranch belonged to the Coulter heirs—she could only pray they were found soon.

The sixteenth day of March was unseasonably hot, even for the arid acres of the Rancho del Oro, located deep in the Mexican state of Chihuahua.

Cade Coulter tossed a roll of barbed wire into the back of the dusty ranch truck and walked to the cab. He reached through the open window and grabbed a thermal jug from the passenger seat. With one easy gesture, he unscrewed the lid and tilted his head back to drink. The cold water washed the dust from his throat and he didn’t stop swallowing until the jug was nearly empty.

It’s too damned hot, he thought as he wiped his forearm across his brow. The aviator sunglasses he wore blocked some of the sun’s rays but not all. He tugged his Stetson lower to further shade his eyes from the sun’s glare and leaned against the truck’s dented fender. A memory of brisk, chilly air in Montana’s early spring intruded but with the ease of long practice, he ignored it, focusing on the present.

A hundred degrees in March. It’s going to be hotter than the hinges of hell by midsummer. He studied the pasture inside the fence break he’d just repaired, assessing the barely visible green in the arid landscape. Under the best of circumstances, the desert-dry land offered scant feed for cattle but the winter had been even drier than usual and the land was showing the effects.

Maybe it was time to head north for the spring and summer—Utah, Idaho, maybe Wyoming, or even Canada. In the three years since he’d left the Marines, he’d worked on a series of ranches, spending summers in northern states and heading south to Mexico for the winter. There was always work for a man who knew his way around cows and horses, especially if he didn’t care whether he spent weeks on the range, far away from towns and the company of other humans.

A plume of dust moved toward him down the dirt track that followed the floor of the cactus-dotted valley and disappeared over a rise several miles away. This was the first time in the two weeks he’d been sleeping at the line camp and riding fence that he’d seen signs of life beyond the occasional steer, jackrabbit or coyote.

The del Oro bordered an area with active bands of rebels—unexpected visitors were always suspect. Cade leaned into the pickup through the open window, set the gallon water jug on the seat and took a loaded rifle from the rack mounted over the back window.

Friend or foe, it paid to be ready for anything. Especially when a man spent his days this far from civilization. Fortunately, he wouldn’t need to use the gun, as the truck drew nearer and he recognized a young employee from ranch headquarters.

“Hey, Cade,” Kenny called as he braked to a stop, dust swirling around the dirty pickup truck with the ranch logo on the door. “I’ve been looking for you since yesterday.”

“You got a letter from an attorney in the States. Boss thought it might be important so he sent me out with it.”

Cade cradled the rifle as he took the envelope, glanced at the return address and felt his blood run cold. The last bitter, angry words his father had said to him rang in Cade’s mind as clearly as if Joseph Coulter had uttered them yesterday instead of thirteen years ago. If you leave, don’t come back—not until you get a letter from my lawyer telling you I’m dead.

The words brought an instant memory of his departure from the ranch, the rearview mirror reflecting three pickup trucks following him, each driven by one of his younger brothers.

Did they know Joseph Coulter was dead?

No, Cade thought with instant certainty. He hadn’t heard from any of them in several months and they would have contacted him immediately if they had learned of the news.

Cade realized the young cowhand had stepped out of the truck and was eyeing him expectantly.

He ripped open the envelope and unfolded the single sheet of paper, swiftly read the short paragraph, then refolded and tucked the brief message back into the envelope.

“Well? Was it important?”

“Yeah.” Cade tucked the letter into his shirt pocket. “I need to pick up my horse and gear at the line camp. Tell the boss I’ll be in late tonight to collect my wages before I head north.”

Cade didn’t do touchy-feely emotional stuff but something about the kid’s worried face made him relent.

“My father passed away.”